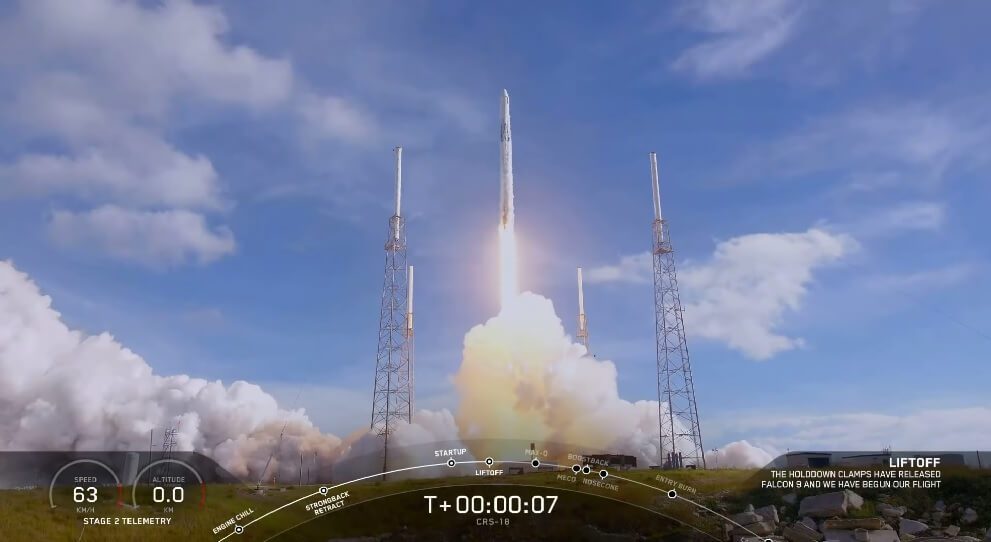 Following a week of delays, the SpaceX Dragon CRS-18 ISS resupply mission lifted-off from Cape Canaveral, United States of America, at 25 July, at 2202 GMT, utilising the SpaceX Falcon 9 launch vehicle. The mission is carrying 1,691 kg of supplies and equipment to the ISS alongside the IDA-3 (International Docking Adapter), which is replacing the IDA-1 payload that was lost during a SpaceX launch failure in 2015.

Also on-board the DRAGON capsule are several scientific experiments which will be installed onto the ISS, plus three CubeSats which will be deployed by the crew at a later date.

The CubeSats are two from the USA; RFTSAT 1 and MAKERSAT 1 from North Nazarene University and one from Egypt; NARSSCUBE 2 built by the National Authority for Remote Sensing and Space Sciences.

This launch was another great example of the progress SpaceX has made in its campaign for greater re-usability. This was the second flight of the first stage used in this launch, having previously lofted the preceding Dragon CRS-17 mission in May. Continuing its survival streak, the first stage made a successful landing on the Drone ship Of  Course I Still Love You off the Florida coast 8 minutes after lift-off.

Also the DRAGON capsule itself was being re-used for an as-of-now record third time having originally flown the CRS-6 mission in April 2015, and then the CRS-13 mission in December 2017.