It is often said that “There are no atheists in foxholes”. That is, at times of extreme hazard in battle, it is assumed that every soldier will be praying. And so, the same might also be assumed of astronauts waiting on their launch pad, especially when they consider, in the words attributed to early NASA Mercury astronaut John Glenn, that they are “sitting on top of two million parts — all built by the lowest bidder”.  It was not for nothing that the NASA launch announcer wisely wished him “God Speed John Glenn” as he blasted off on his Mercury-Atlas MA-6 flight on 20 February 1962. 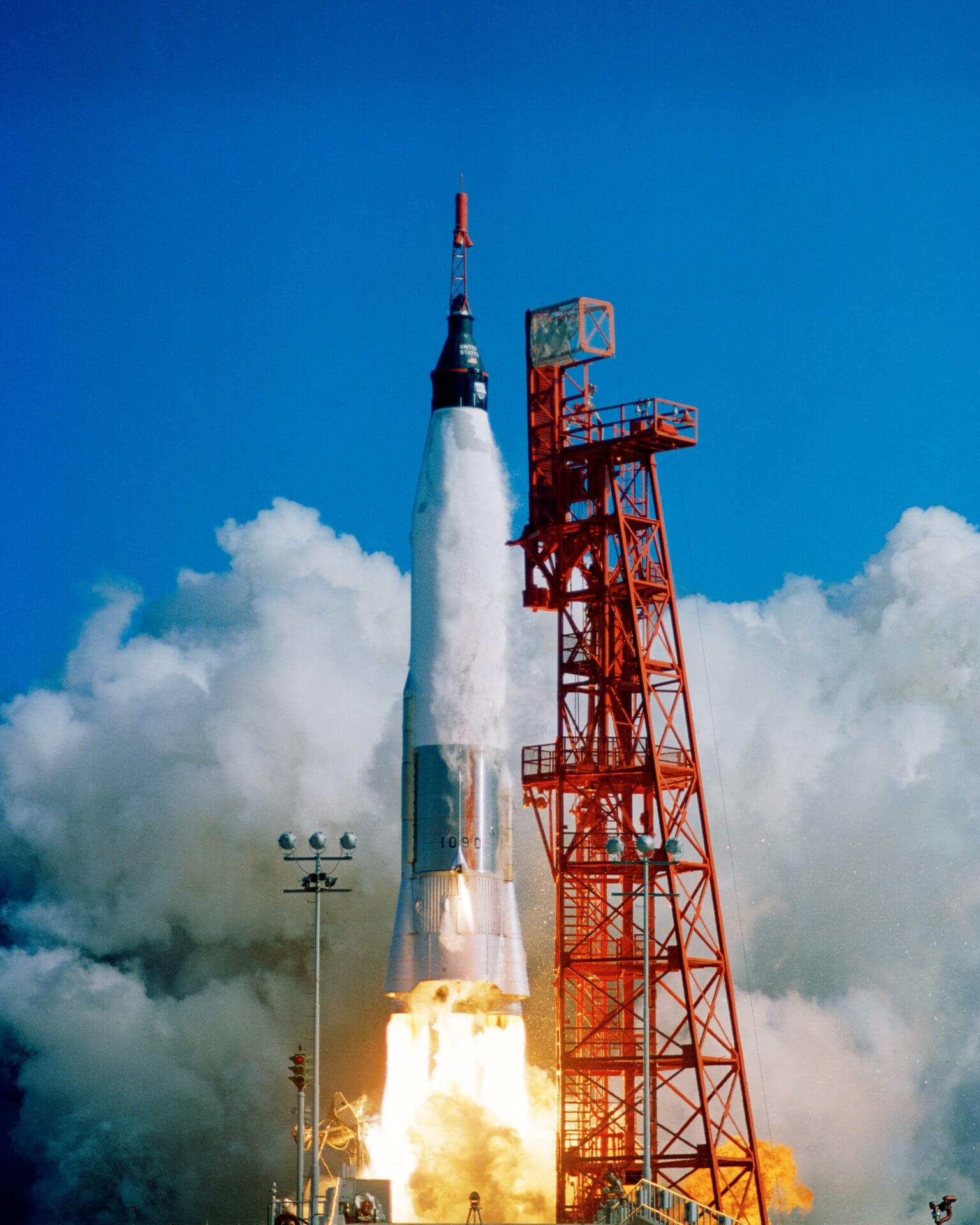 In fact, even now, the failure rate for human launches remains over two per cent, even if modern escape rocket systems can now thankfully save the crew in the event of disaster. This happened on a Soyuz MS-10 launch last year when the two-man crew’s escape rocket successfully pulled their parachute-equipped capsule away to safety from their ruptured rocket.

As such, despite the scientific, engineering or test pilot background of most involved in spaceflight, religion has a surprisingly strong association with human astronautics. This was most famously exemplified by Apollo 8 Commander Frank Borman who made a TV broadcast reading from Genesis as he and his crew circled the Moon on Christmas Eve in December 1968.  That was very controversial at the time, so on the first moon landing mission in July 1969, Apollo 11 astronaut Buzz Aldrin decided to conduct a self-administered communion service soon after his and Neil Armstrong’s lunar landing, but only while the TV camera was off.

Of course, it is not just Christian worshippers who have ventured into space. Followers of Islam have also flown to “infinity and beyond”, well – into low Earth orbit at least. Mind you, they do have trouble praying there given that as they progress around the Earth at 17,500 mph the direction of Mecca relative to them is constantly changing. This issue first came up when a Saudi prince Sultan bin Salman Al Saud flew on the Space Shuttle mission STS-51G since followed by other Moslem astronauts.  After consultation with Moslem clerics, it was agreed that so long as prayers were at least started in the direction of Mecca then this would be ok.

Meanwhile, while the Soviet communist space programme did not use them, given its officially atheist stance, Russia’s space agency Roscosmos has since hired bishops and priests from the Russian Orthodox Church to bless their cosmonaut-carrying (sometimes NASA/ESA astronaut carrying) Soyuz rockets and spacecraft, and the crew themselves, before their flights.

That said, the Russian cosmonauts often prefer their own rituals to encourage good mission luck. Ever since the first ever space traveller Yuri Gagarin almost lived up to his Yuri name by urinating on the wheel of launch pad bus before his famous Vostok launch, so all subsequent cosmonauts carrying on doing the same.  They all realise that while skill and professionalism are essential – so is a bit of good luck.

It is not just human spaceflight programmes that suffer from superstition, so do unmanned launch operations apparently. The “curse of Slick 6” was alleged to have affected the Space Launch Complex 6 (SLC-6) launch pad at the US Air Force Vandenberg launch site in California over a number of years, apparently causing a series of pre-launch and launch accidents, as well as project failures related to the launch pad.  The curse was apparently put on the SLC-6 launch pad because it was built on the ancient burial site of local Chumash Indian tribe. Eventually a deal was allegedly made, and the native Americans quietly removed the curse.

While US citizens have the “In God We Trust” note imprinted on US dollar bills, and perhaps in their psyche as well, flight safety engineers and mission assurance officers at NASA (and in Roscosmos) appreciate that actually the more care and attention that you take, the less luck or divine intervention you need. This is neatly summed up by the advice made in an old Sinbad film: “Trust in Allah…but tie up your camel.”

This writer belatedly reminded his then vicar of this excellent maxim a few years ago when the said priest had his bike stolen because he had not locked it up. As NASA prepares to return US and European humans to the Moon via its new Project Artemis, we can only hope that they, in turn, properly lock up any ascent modules and lunar rovers lest any get stolen from the lunar surface.

We pray that for the safety of the crew, this very unlikely scenario never happens.

David Todd is Head of Space Content at the spaceflight information company Seradata. He hopes that his job title does not offend the Lord God Almighty too much.

On 8 December 2016, NASA and the rest of the USA was mourning the death of one of its astronaut Read more

Veteran US Astronaut John Glenn is awarded Medal of Freedom