According to the IEEE Spectrum (Mark Harris), the US “store-forward” start-up communications firm, Swarm Technologies, has incurred the wrath of the US Federal Communications Commission by deliberately launching four “Space Bee” (aka BEE – Basic Electronic Elements) spacecraft without having FCC permission to do so. The 0.25U cubesat flat-plat spacecraft, with extendable antennae and a mass of under 1kg, are technically picosats.

The satellites were launched as part of the shared payload of an Indian PSLV in January to demonstrate a new “store-forward” Internet of Things (IoT) communications network.  However, because of concerns about their trackability – or lack thereof (despite their inbuilt GPS-based position reporting system) – the FCC denied the firm a licence, offering instead to grant licences to a later batch of larger 1U cubesat-sized BEE spacecraft.  However, permission for this later launch has been revoked by the FCC since the launch of the “rogue” satellites. 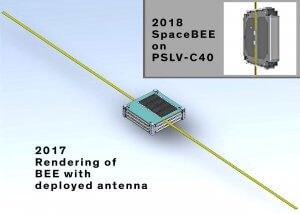