At 1413 GMT on 30 March, a Falcon 9 v1.2 Block 4 rocket lifted off from the Vandenberg launch site in California carrying 10 Iridium NEXT satellites for the Iridium Communications firm which are in the process of replacing the original Iridium constellation satellites.  The flight was the fifth Falcon 9 launch for Irdium out of eight planned. 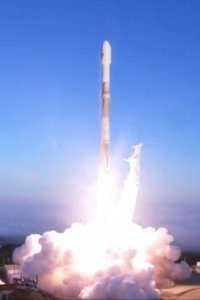 After an initial parking orbit and a circularisation burn to circularise the orbit, all ten spacecraft were sequentially released as planned.  This could not be viewed due to an apparent licencing issue with the NOAA which prevented “imaging” from the second stage.

The Block 4 first stage B1041 with legs was a reused example, having previously been flown and been landed on an earlier flight. However, despite it having legs, there was no attempt to reland this version and it splashed down into the Pacific after a simulated fly back trajectory was made for research purposes. Later Block 5 first stages will attempt to be reused upto ten times.

There was however, another attempt to recover one of the two “clamshell” fairing pieces using attitude thrusters and a radio controlled parafoil/parachute system and a boat called Mr Stevel with a recovery net aboard it.  In the end, the attempt failed again, this time because the parafoil failed to deploy properly (it was left in a twist) due to an interaction with the fairing itself.  The fairing was later recovered from the ocean.