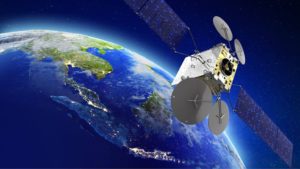 An artist’s impression of the new satellite in-orbit. Courtesy of Thales Alenia Space

Thales Alenia Space (TAS) has been awarded a contract to build a dual-band HTS GEO satellite for PT Telkom, Indonesia. The satellite will carry C- and Ku-band payloads and is due to be located at the 113 degrees East national slot, according to the 28 October announcement. Expected to weigh circa 4,000 kg it will be based on the TAS Spacebus 4000B2 platform.

A launch is planned for 2024 and is intended to enable Indonesia keep its rights to the GEO slot. These are in jeopardy following the launch failure of the Nusantara 2 satellite built and launched by China in April 2020. This satellite was itself meant to be a replacement for the older Palapa D spacecraft which was due to be retired that year.