Just like London buses, three Mars missions all seemed to arrive at the same time. While this was mainly due to planetary alignments favouring certain launch and thus arrival dates, inexpert media commentators reported that a “race” had happened and that the United Arab Emirates had won. 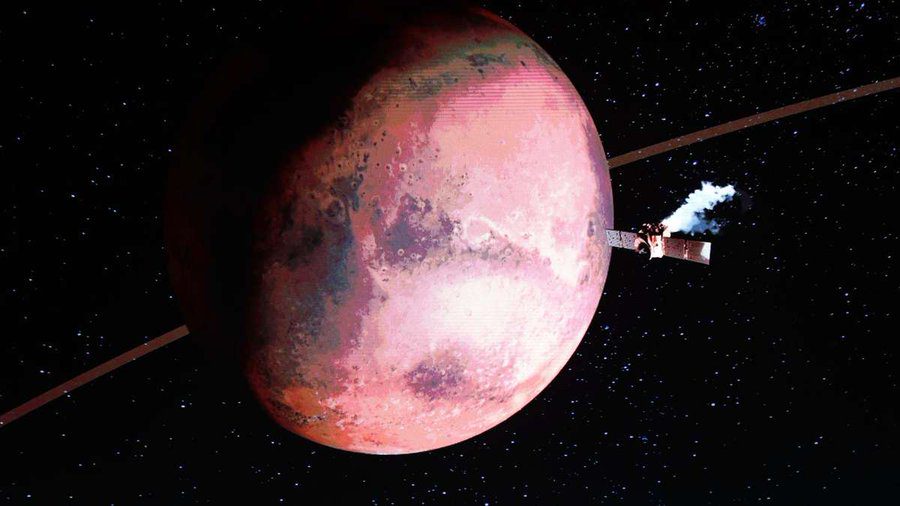 That said, it is true that UAE’s Hope orbiter spacecraft did arrive first. The Al Amal (Hope Probe) carried out a 27-minute burn of six of its thrusters to brake itself into Mars orbit, which it entered at 1737 GMT on 9 February. The Mars probe was designed by the MBRSC – Mohammed Bin Rashid Space Centre – but it actually used a bus/platform built by the University of Colorado. Its international nature continued with its launch on 19 July 2020 by a Japanese H-2A202 (SRB-A3) rocket.

UAE became the fifth nation to successfully put a probe into orbit around Mars. The initial 49,380 x 1000 km orbit at 19.6 degrees inclination will later be circularised to its 43,000 km operational orbit inclined at 25 degrees. In this operational orbit, the Hope Probe will measure the Martian atmosphere. One of its research objectives is to research how water vapour leaks from the planet and how heat is transferred through the atmosphere.

Next to reach Mars was China’s first interplanetary orbiter and rover mission, Tianwen-1, which successfully entered the planet’s orbit on 10 February. The five-metric-ton Tianwen was launched on 23 July 2020 by a Long March 5B (Y4) and was built by CAST. Its name in Chinese means “Questions to Heaven” from a poem by Qu Yuan (340 278 BC). 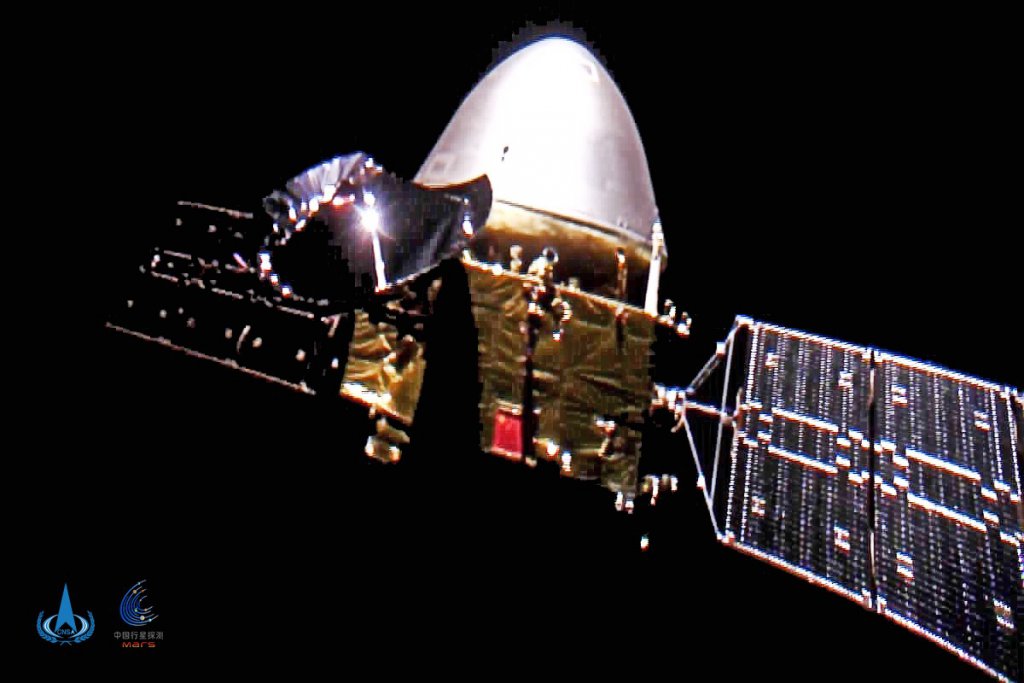 Image of Tianwen-1 spacecraft taken by an external remote camera spacecraft during its journey to Mars. Courtesy: CNSA

It fired its 3 kN rocket engine to slow itself into orbit at 1152 GMT. By 1208 GMT it was in a 180,011 km x 445 km orbit at 10.4 degrees inclination. This very elliptical orbit will be slowly circularised and lowered. On its first manoeuvre on 15 February 2021, the Tianwen-1 orbiter and rover combination radically changed its orbital inclination to a near polar 181,532 x 278 km at 87.3 degrees inclination.

The orbiter part of the mission has topography and science as its main goals and carries a high-resolution panchromatic camera (HRC), a medium resolution colour camera (MRC) for Mars surface topography, an HF/VHF radar (OSR) for subsurface structure, a visible to infra-red spectrometer (MMS) for surface mineralogical composition, a magnetometer (MM) for Solar and Martian fields, an analyser (MINPA) for low-energy ions and neutral particles, and a detector (MEPA) of high-energy electrons, protons and heavier ions.

The Tianwen-1 rover’s landing attempt is set for late May or early June. The rover is expected to last just over three months on the surface. It carries high and medium resolution cameras (NTC) for navigation and surface topography, an ultraviolet to infra-red multispectral camera (MSC) for surface imaging and composition, a VHF radar (GPR) for subsurface composition, a magnetometer (MSMFD) for fields near the surface and instruments (MMMI) for atmospheric temperature, pressure and wind.

The final mission to arrive was the NASA Mars 2020 Rover Perseverance, nicknamed “Percy” by its NASA JPL (Jet Propulsion Lab) controllers. It was launched on 30 July last year by an Atlas V 541/RL10C-1 rocket into its interplanetary transfer orbit. Unlike the other two Mars missions, the NASA mission did not brake into a parking orbit. Instead, the landing system with its rover attached, made a direct entry into the Martian atmosphere on 18 February after the mission’s cruise stage was jettisoned at 2026 GMT at 1600 km. Two cruise mass balance weights later came off at 2028 GMT at an altitude of 1258 km. 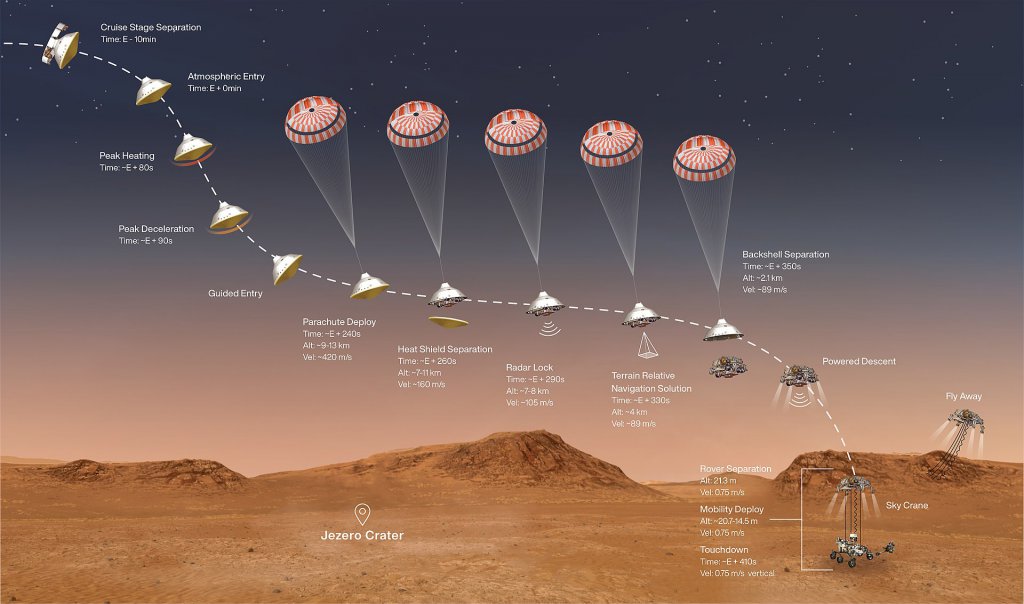 Atmospheric entry was achieved at 125 km at a velocity of 5.4 km/s. The craft bled its speed until six balance masses were ejected followed by a supersonic deployment of its main parachute at 2040 GMT. The heat shield aeroshell was then ejected at an altitude of 11 km. The main parachute and backshell was fired off at 2041 GMT at an altitude of only 2200 m. Descending under engine rocket power, the “Skycrane” descent stage hovered just above the ground in the Jeziro crater while gently lowering the one-metric-ton Mars 2020 Perseverance rover on cables to a touchdown at 2043 GMT. The hovering stage was then released to fly away from the landing zone before impact with the ground.

A video of the landing from NASA is here 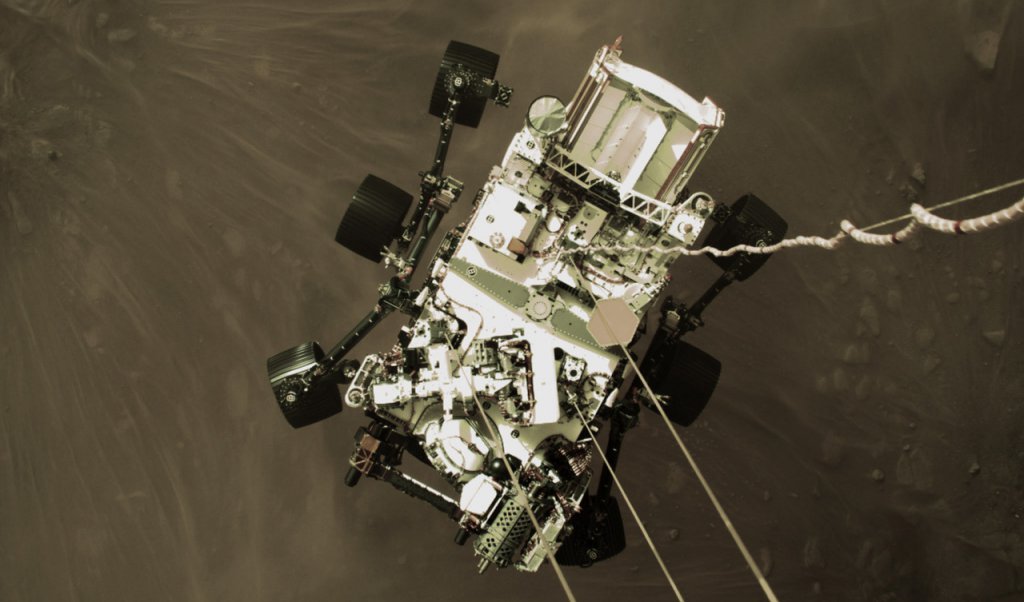 NASA released this photograph of the Mars 2020 Rover Perseverance being skycraned to the surface of Mars. Courtesy: NASA-JPL/Caltech

The rover is designed to study and collect samples via a variety of instruments as part of its attempt to examine if Mars ever sustained biological life. Some of the samples will be recovered by a separate return mission. The rover will also test out oxygen production technologies on the planet. It carries a small 2kg camera-equipped helicopter drone called “Ingenuity” for a performance test.