The crescendo of the Conservative (Tory) Party Conference being held in Manchester in early October was supposed to be a rousing speech from Prime Minister Theresa May. However, it all ended rather badly. At the start, cheeky chappie comedian Lee Nelson (Simon Bodkin) managed to publically present her with a fake P45 leaving employee tax form during her speech which he duly announced was from her Foreign Secretary and would-be Prime Minister Boris Johnson (the prank was an especially embarrassing security breach given May’s very pro-security and state surveillance stance).  Then, as her bad luck continued, letters from the set’s back drop slogan fell down. And it did not end there. The Prime Minister struggled to get a word out due to a very bad cough, which meant that even her speech’s more popular announcements, such as the promise to build more council houses and to put cap on private housing rent rises, got lost in the hubbub.

A much better speech was made earlier in the conference by Boris Johnson, who said, in a reference to the British Lion symbol of the British Empire past, that he wanted “to let that Lion roar”. He had earlier warned that if it ever got into power, a Jeremy Corbyn-led Labour administration and its naively unaffordable (if popular) policies would be danger both to the British economy and to national security.

Johnson then announced, to much audience laughter, that he had another job suggestion for Jeremy Corbyn. After mentioning that is brother Joe was the Science Minister in charge of UK’s growing Space Programme, Boris Johnson said. “I have a candidate for the first man we gently blast into orbit, and that is the superannuated space cadet from Islington.” 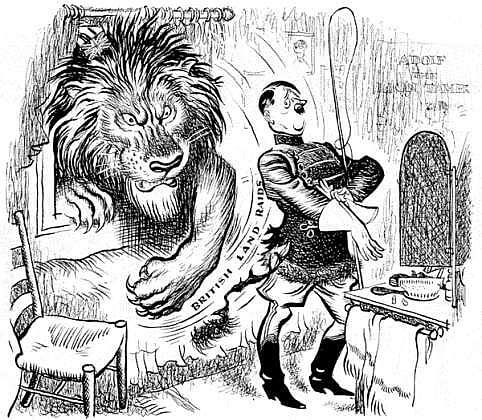 The “British Lion” takes a swipe at the evil dictator Hitler in this World War II era cartoon. Courtesy: Canadahistory.com

Comment by David Todd: Not sure if the UK space programme should be used in this way as part of a general political knock about. Then again, at least it is getting a mention. During the last general election, neither the Conservative or Labour Party manifestos even mentioned space – although the manifesto of the smaller Liberal Democrat Party did note its importance.