OneWeb, the partially completed low Earth orbit (LEO) communications satellite constellation, currently moribund in Chapter 11 bankruptcy protection, has at least for now been rescued. For having already raised (and used) US$3.4 billion to build and launch 74 broadband satellites of its planned total of 650, the company ran out of cash when its principle backer SoftBank found that it could not invest any more capital. Like the 7th Calvary riding to the rescue, the UK Government (reportedly under internal persuasion from Dominic Cummings, principal aid to Prime Minister Boris Johnson) decided to front up US$500 million (GBP£400 million) for a 45 per cent stake in a US$1 billion rescue bid for the constellation, with the Indian telecoms firm Bharti Global which also takes 45 per cent, leaving its previous owners (mainly SoftBank) with just 10 per cent. The transaction is expected to be completed in late 2020. The transaction is still subject to approval from the US Bankruptcy Court, alongside other regulatory approvals. The exact size of the equity share purchased has not been revealed.

In the end other expected bids failed to materialise. China’s mooted bid came to nothing after it apparently realised that its companies would not be allowed to purchase the firm due to US security concerns. 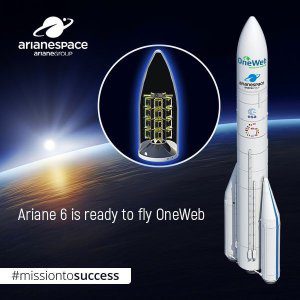 Arianespace released this image showing how the OneWeb satellites will be carried. Courtesy: Arianespace

The idea of the joint investment is that Bharti Global would get a global broadband satellite system, while the UK would get a system which could carry its satellite navigation payload – an increasing necessity after the UK was ejected from the EU’s Galileo programme following Brexit. The USA, by the way, is said to be very much in favour of back up navigation satellite system not based around the Medium Earth Orbit (MEO) architecture used by GPS and Galileo.

OneWeb has stated that the new funding would allow it to “effectuate the full end-to-end deployment of the OneWeb system.” This may however, not be the total originally envisaged 650 satellite system but a cut down version. Nevertheless, European launch provider Arianespace will be relieved since it had only completed three of an expected 21 Soyuz launches to date. OneWeb also had contracts to launch satellites, in groups of about thirty, on the maiden flight and two subsequent launches of Ariane 6. The maiden Ariane 6 launch had been delayed until late-2021 for reasons unrelated to OneWeb’s situation.

With respect to the manufacture of the OneWeb spacecraft,OneWeb Satellites, the joint venture of OneWeb and Airbus, is expected to carry on with the constellation’s construction. Although, the location of the actual construction may yet change to European factories from ones based in USA. The spacecraft themselves may be needed to be redesigned if a navigation payload is to be included. One other beneficiary could be Airbus subsidiary SSTL whose previous expertise in navigation satellite payloads may help it win the contract for the UK government’s navigation payload.

Updated on 7 July 2020 to reflect new information on size of stakes taken.

UK astronauts: a small step to no-where or a giant leap for the G8 anomaly?

China’s Moon, Russia’s Mars and the UK’s origins of the Universe

best of the holiday season – 2007 reviews