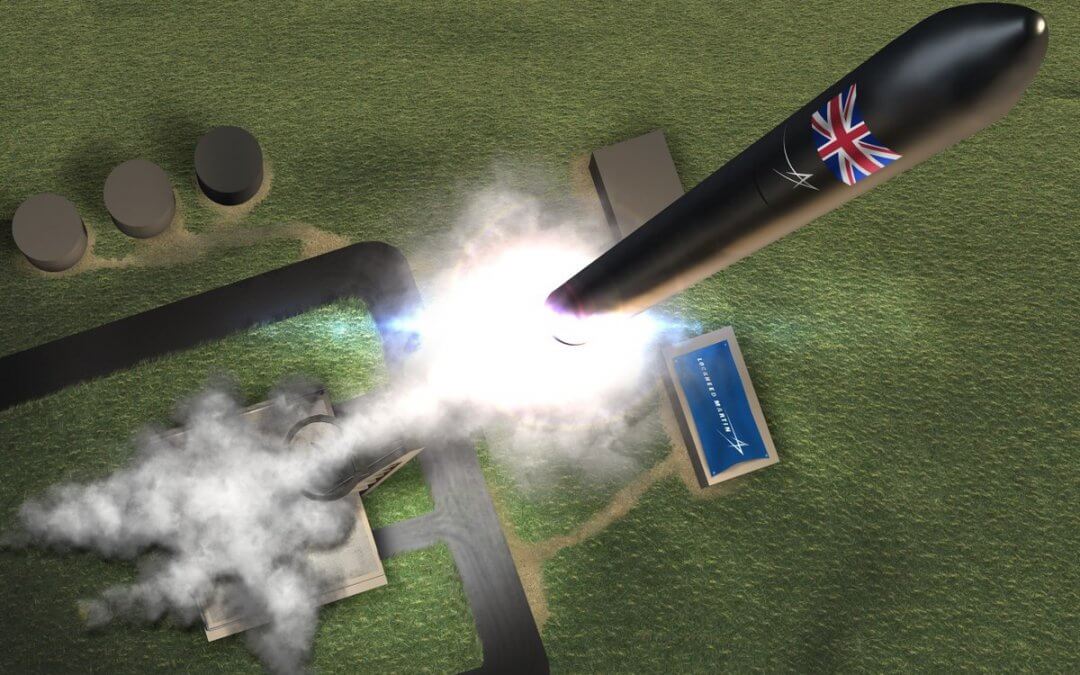 Ahead of the Farnborough International Air Show, the UK Space Agency (UKSA)finally decided on its choice of launch site for vertical launching using conventional rockets. It is on the A’Mhoin peninsular, Sutherland, on the north coast of Scotland. Lockheed Martin is to establish vertical launch operations from this new “Sutherland Spaceport” using a two-stage liquid fuelled rocket, with a UK-supplied engine and agile upper-stage technology able to deploy up to six small satellites to separate orbits. 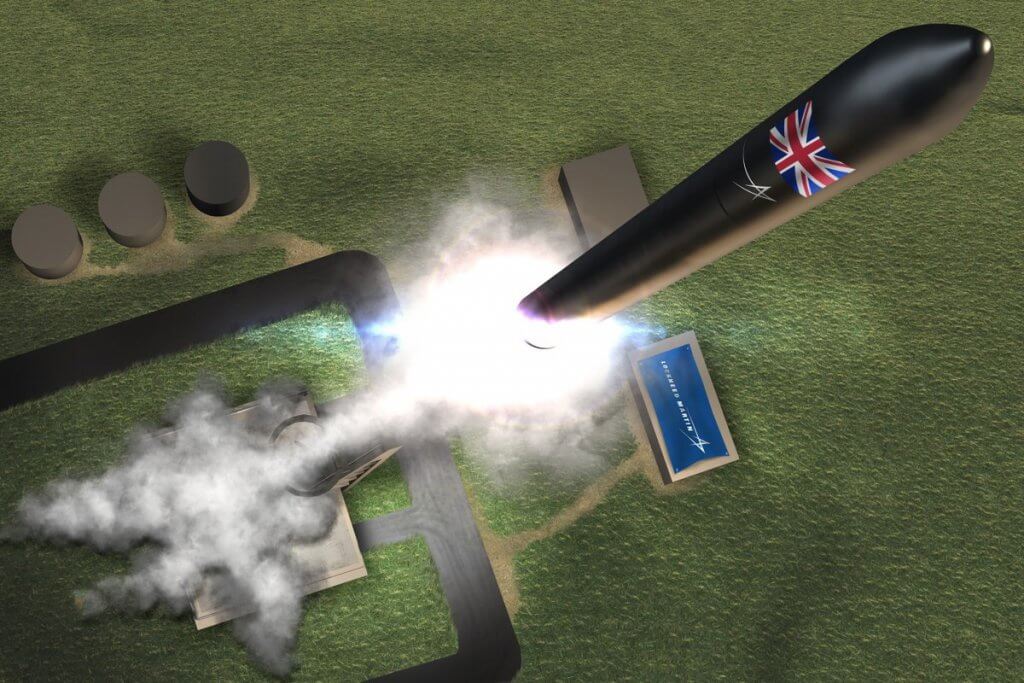 This will be done with support from two UKSA grants totalling GBP£23.5 million. Lockheed Martin would lease and operate the launch pad at the Sutherland Spaceport. The rocket design has yet to be confirmed but it has been mooted that it could be a version of the two-stage New Zealand-based Rocket Lab’s Electron. Lockheed Martin was remaining tight-lipped, although discussions with Rocket Lab, in which Lockheed Martin has an interest, are believed to be ongoing.

The aspiration is to start launching from there within three years. A grant of £2.5m has been awarded to Highlands and Islands Enterprise to develop the vertical launch spaceport. It will be used to launch small observational and telecommunications satellites going to sun-synchronous and other near polar low Earth orbits.

At the LaunchUK conference at the Farnborough International Air Show, Patrick Wood, Director of Lockheed Martin’s International Business Development, said that the plan was for the rocket to have a high flight rate/cadence (the aspiration is for 10 launches per year) with a capability for “rapid response launches”, although he hinted that the latter might cost more.

Would the UK government pay above commercial prices to launch its military satellites in order to support a new UK launch capability, as apparently happens in the US? Air Vice Marshall Rocky Rochelle, Chief of Staff Capability at the Ministry of Defence, would only say that it would pay “a reasonable price”.

With respect to US involvement in the programme, the UK and US will soon begin formal negotiation of a Technology Safeguards Agreement, which will establish the legal and technical safeguards covering technical information transfer etc.

In addition, a UK-based firm, Orbex, is developing its own rocket called Prime to be used on a separate pad at the Sutherland Spaceport. Orbex has announced that it has secured a total of £30 million (US$40 million) in public and private funding for the development of Prime, including a UK government grant of £5.5 million.

Orbex, which has subsidiaries and production facilities in Denmark and Germany, has also received funding from two of Europe’s largest venture capital funds, Sunstone Technology Ventures and the High-Tech Gründerfonds, as well as from private investors, the European Space Agency (ESA) and the European Commission Horizon 2020 programme.

The design uses renewable propane and liquid oxygen (LOx) as propellants, which it claims cuts carbon emissions by 90% compared with other combinations. The propane also has the advantage that it does not refreeze when chilled, allowing co-axial propellant tanks for both the LPG 100 propane and LOx.

Orbex claims that its Prime launcher designs are up to 30% lighter and 20% more efficient than any other vehicle in the small launcher category. The rocket uses a novel zero-shock staging system, called Magic, that leaves zero orbital debris. It also features a novel reusability concept, with an innovative low mass recovery and reflight system. Orbex CEO Chris Lamour stated that the firm was aiming mainly at the non-US launch market.

The European Space Agency (ESA) has contracted Orbex to study the development of a European micro launcher solution. Jean-Jacques Dordain, a former Director General of ESA, has joined Orbex as Chairman of the Advisory Board. Another notable figure from the space industry, Jan Skolmli, formerly at SSTL and previously Sea-Launch, has recently been appointed as Orbex’s Chief Commercial Officer. 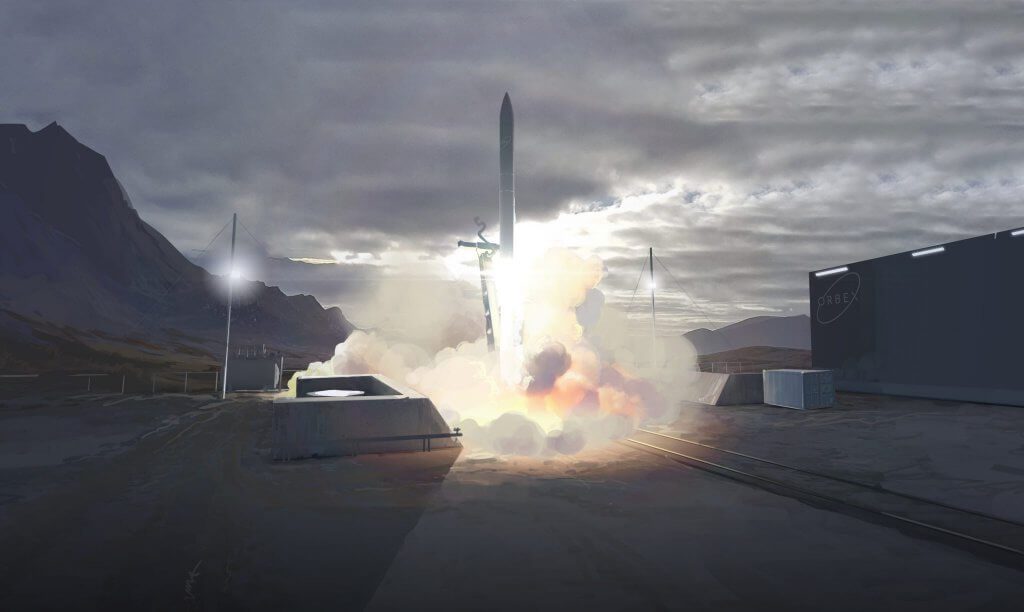 Update on 17 July: Orbex announced at the Farnborough International Air Show that Elecnor Deimos has acquired a stake in Orbex. The firm has become preferred supplier of all launch services required to place Elecnor Deimos satellites into orbit. Elecnor Deimos is to supply Orbex with a Guidance, Navigation and Control (GNC) system.

Horizontal launches still in the picture and may be first up

In addition to the “vertical effort”, a £2m development fund has been set up to assess horizontal spaceport options at: Newquay, Cornwall, England; Glasgow Prestwick (near Ayr on the west coast of Scotland); and in Llanbedr in Snowdonia, Wales. These could be used both for launching suborbital flights employing Virgin Galactic’s air-launched SpaceShipTwo, and for orbital flights of Virgin Orbit’s sister, via the air-launched LauncherOne vehicle. 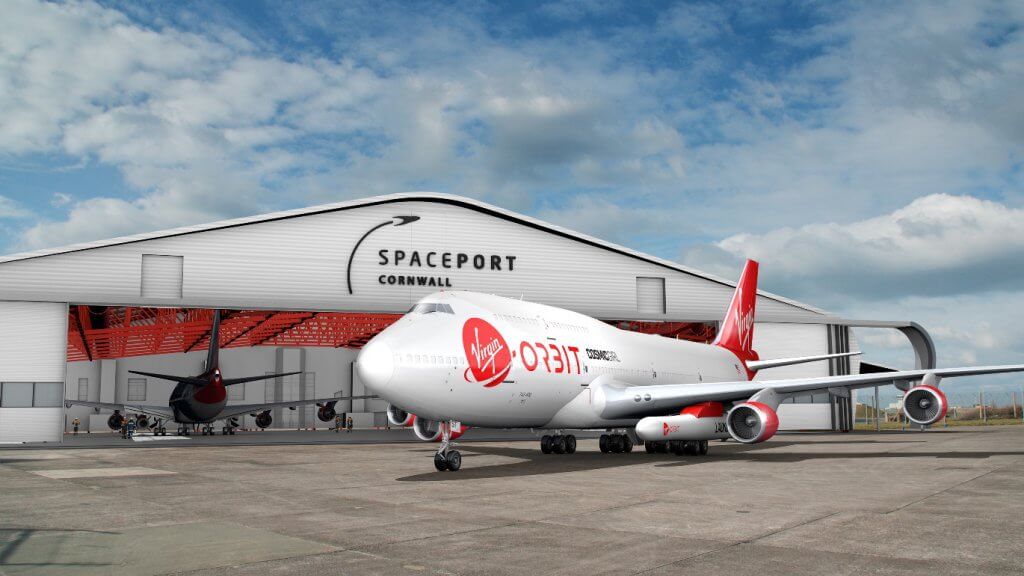 In related news, California-based Virgin Orbit has formally selected Spaceport Cornwall (aka Newquay airport), to operate from outside its US home, and this looks the likeliest site to achieve full operational spaceport status for horizontal launches. Newquay has an earlier space connection: while never used, its very long runway made it an emergency landing site for the Space Shuttle.

Sam Gyimah, UK Science Minister, said: “The announcement of a strategic partnership between Virgin Orbit and Cornwall Spaceport is great news for the region and the UK’s ambitions for regular, reliable and responsible access to space.”

Virgin Orbit hopes to provide launches from a spaceport at Newquay by 2021. The plan is for a modified Boeing 747-400 aircraft, called “Cosmic Girl”, to carry a LauncherOne rocket under its wing to a launch range over the Atlantic. It would release it at around 35,000 feet for onward flight into space, carrying a satellite into Earth orbit.

Update on 17 July 2017: The Newquay spaceport has received another vote of confidence – at least for its testing facilities. Skyrora, the small launch vehicle operator, announced at the Farnborough International Air Show that it would begin a testing programme for its new Hydrogen Peroxide/Kerosene small 3.5 kN regeneratively cooled engine. This has an unusual cycle, similar to that used by the engines on the previous British launch effort Black Arrow of the early 1970s. Catalytic decomposition of hydrogen peroxide to water, steam and oxygen drives the engine’s turbopumps. The new engine will be tested at Newquay’s rocket test facility in Q4 2018. The test facility is actually a hardened aircraft shelter. It has been the base for the Bloodhound Super Sonic Car project for rocket tests in preparation for a world land speed record attempt next year.

The Anglo-Ukrainian firm, funded by entrepeneur Max Polykov who also has interests in the resuscitated Firefly launch effort, hopes to launch its initial single-stage suborbital rocket, the Skyrora SK-1, by the end of next year. This will be small enough to use a mobile launch structure and will not need an official spaceport to launch from.

This will be followed by three-stage vertically launched orbital rocket, the Skyrora-XL, using 3-D printing techniques. The launch site for this has not yet been chosen – it is likely to be a Scottish island or mainland launch site. The rocket, which is expected to fly in two to three years’ time, uses enlarged first-stage engines, each with a thrust of about 7 kN, with a single one of these engines being employed by the second stage. Two of the earlier mentioned small 3.5 kN engines will be fitted to the third stage. The rocket will be able to carry 300-350 kg to a near polar sun-synchronous low Earth orbit for less than US$10 million. 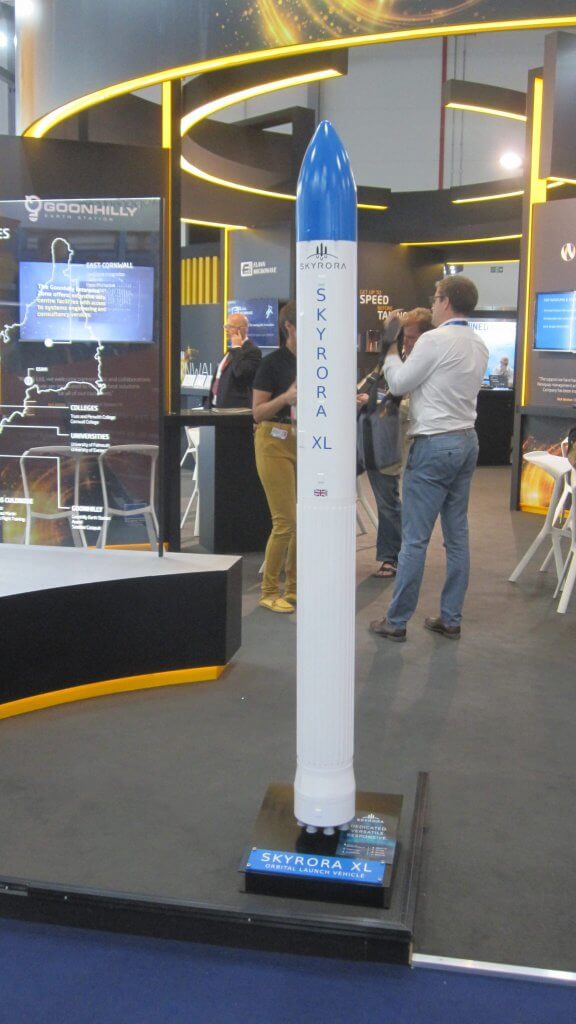 While Hydrogen Peroxide is highly corrosive and thus has handling difficulties, in the words of Skyrora’s chief engineer, Robin Hague, it is a “good coolant, self-pumping, and self-igniting”.

Greg Clark, UK Business Secretary, said: “As a nation of innovators and entrepreneurs, we want Britain to be the first place in mainland Europe to launch satellites as part of our Industrial Strategy. The UK’s thriving space industry, research community and aerospace supply chain put the UK in a leading position to develop both vertical and horizontal launch sites.

“This will build on our global reputation for manufacturing small satellites and help the whole country capitalise on the huge potential of the commercial space age,” he added.

Comment by David Todd:  These announcements should be welcomed – the UK can at least look India in the eye, which had been usurping its previous imperial mother in space launch technology. In fact, while the Indian space programme is funded by nearly US$2 billon per year, the British Government has managed to pull off the trick of getting the UK back into the space launching business after a near 50-year hiatus – and for a relatively paltry sum of money. The Treasury will be pleased.

And the British space industry will be as well – in the words of Transport Secretary Chris Grayling, who reiterated aerospace lawyer Joanne Wheeler’s comment, a UK launch capability will provide a “one stop shop” for those wishing to purchase a satellite system including fast delivery into orbit.

As for the choice of launch site? Well the A’Mhoine peninsula in Sutherland, Scotland, was probably one of the most cost-effective options for a vertical launch spaceport in terms of transportation logistics and infrastructure development costs. Alternative sites on some of the Scottish islands would have suffered in this respect. 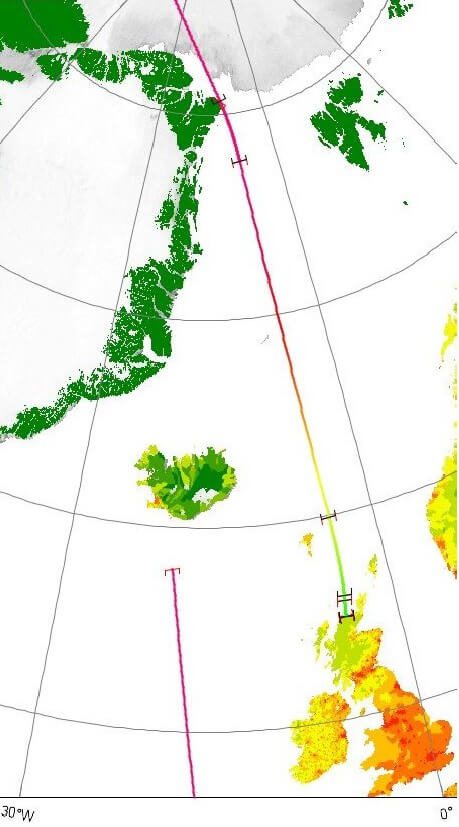 From Sutherland, only a small dogleg is needed to miss the Faroes – but some major oil fields are under the trajectory corridor. Courtesy: BIS Nanosat launch vehicle Feasibility Study

Nevertheless, a recent Nanosat launch vehicle study by the British Interplanetary Society (BIS) shows that a launch vehicle flying from Sutherland will have problems in serving the near polar launch market. For example, any flights from A’Mhoine will need to do a “dogleg” trajectory correction to skirt around the Faroe Islands in order to make sure that the population is not at risk from falling stages, failed launches etc.

While this “dogleg” will use up only a relative small amount of fuel/payload capability, the resulting trajectory still involves flying over many of the “West of Shetland” oilfields in the North Sea. Don’t forget the UK oil business brings in billions of pounds of revenue – dwarfing any potential revenues from space launching – so any disturbance, eg via NOTAM launch announcements, to the air and sea operations of the oil business is likely to be financially painful.

Oil rigs, and the ships and aircraft that support them, are of very high and concentrated value, as are the people on board, so while the chance of hitting them will be very small, third party insurance for such launches is likely to be very expensive. In some ways, it could be argued that overflying the sparsely populated Northern part of the Faroes, with its few crofts and farms, would be less risky in terms of hazard to life and high-value assets.

With respect to the horizontal take-off spaceport sites, Newquay in Cornwall, England, and Prestwick in Ayrshire, Scotland, are arguably good choices. They would both allow rapid access to over-water launch ranges – the Atlantic in the case of westward orbital and suborbital launches for Newquay, and the North Sea for northward-bound, near polar launches from Prestwick, with any dogleg needed flown by the carrier aircraft. Even suborbital launches might take place from there, with tourist suborbital flights “through the Northern Lights” being mooted. These would, however, involve rather long flights north and a higher radiation risk, and would need landing airstrips inside the Arctic circle.

Snowdonia (Llanbedr) in Wales, is not a sensible location for a spaceport and any funding it attracts as a remaining option smacks of just being nice to Wales. To reach a safe ocean launch position, any aircraft/air-launched rocket combination flying from North Wales would either have to overfly Ireland (too high a risk), or fly hundreds of miles extra, past Newquay or Prestwick (at a distance), on its way there