US President Donald Trump and his North Korean counterpart Kim Jong-un have agreed to meet each other as part of a South Korean-brokered negotiation involving the denuclearisation of the North Korean regime’s armed forces in return for non-interference guarantees from America.  The invitation to the talks was formally delivered to the White House by a South Korean delegation and was accepted by the Trump Administration. 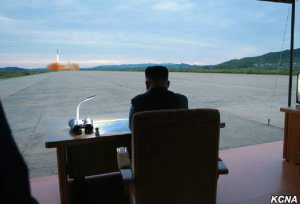 The leader of the Democratic People’s Republic of Korea (DPRK) aka North Korea watches a launch. Courtesy: KCNA

The meeting will be surprising event after months of each leader threatening to destroy each other’s country and insulting each other with personal remarks.  For example, Donald Trump called Kim as short and fat and titling him as “rocket man”, while Kim called Trump a ” mentally deranged US dotard”.  By the way, a dotard is defined as someone whose mind has been weakened by senility.

After Kim Jong-un noted that he had a “nuclear button” on his desk – a reference to North Korea’s acquisition of nuclear weapons and intercontinental ballistic missiles – Trump responded in a tweet: “I too have a Nuclear Button, but it is a much bigger & more powerful one than his, and my Button works!”