It has been revealed by the New York Times that the old “Project Blue Book” investigation into UFO sightings, which ended in 1969, was effectively restarted by the US Government in 2007. The new project, dubbed the Advanced Aerospace Threat Identification Program, received US$22 million in annual funding from the Department of Defense to help analyse military reports of fast-flying unidentified flying objects. Some of the money went to aerospace firm Bigelow Aerospace for analysis of film and actual objects found. Having been restarted, the project was apparently stopped again in 2012 when funding ran out. Nevertheless, some suspect that the project continues under a different stream of funding.

While most sightings and claims of “alien contact” can be attributed to natural phenomena such as clouds or lightning, dreams or hallucinations, or sightings of physical items such as burst or deflated weather balloons, a few remain difficult to explain. These might even be the real thing: alien beings on a visit to Earth flying super-fast aircraft/spacecraft. One of these potential sightings was by US Navy jet pilots, who were flying F/A-18F jets from the carrier Nimitz. They were called on by a US Navy Cruiser to investigate a strange radar return over the Pacific, flying off San Diego in 2004. “Gun camera” footage of their encounter with a fast-moving craft is shown below. Click on the image to see a BBC report of the event. 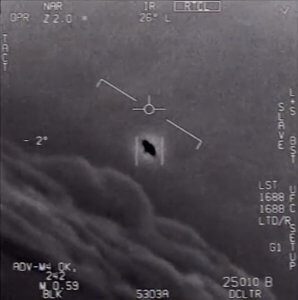 It is sad to note that media sources are reporting the demise of the small satellite maker AeroAstro. According to Read more