US Vice President Kamala Harris has announced that the USA will no longer actively test anti-satellite (ASAT) interceptions – at least not with direct ascent missile systems.

The announcement, in a speech at the Vandenberg launch base in California, comes after concerns that space debris is rapidly approaching the so-called Kessler Syndrome limit above which it exponentially grows via a propagated debris growth process. This would severely curtail humankind’s ability to mount space missions – both manned and unmanned.  “These tests are dangerous and we will not conduct them,” said Harris, noting that she hoped other ASAT interception-capable nations would join this moratorium on tests.

A Russian interception test in November 2021 created over 1,500 of pieces of space debris, some of which directly threatened the passage of the International Space Station. India and China have similarly conducted tests on their satellites, in 2019 and 2007 respectively. The Chinese test was the first to receive heavy criticism after it resulted in 2,800 pieces of space debris.

The USA made a direct interception in February 2008 when a US Navy Standard Missile SM-3, normally used as an anti-ballistic missile, was used to blow up a retired National Reconnaissance Office satellite NRO L-21 (USA 193) in Operation Burnt Frost. The test was conducted under the since much ridiculed guise of attempting to prevent a frozen fuel tank from reaching the surface of the Earth. An earlier interception took place in 1984 when a US Air Force F-15 fighter jet launched an ASM-135 missile that struck the Solwind P78-1 solar research satellite and destroyed it.

Comment by David Todd: There are other ways of destroying satellites. Many of the so-called repair and servicing mission types could also be used to mechanically take apart a spacecraft, with considerably less debris than using an explosive or direct impact interception. 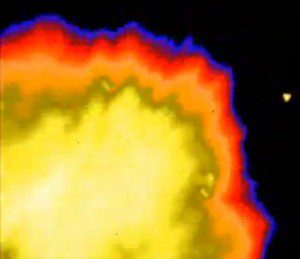