The FIFA World Cup football competition is proving to be a welcome money spinner for the big satellite operators. The APSCC newsletter reports that Eutelsat is broadcasting 5,500 hours of HDTV (High Definition television) from 11 Russian cities during the competition.  That content hours total figure is so high because it includes off-pitch coverage and news reporting.  Meanwhile, Intelsat is reported to have formed a partnership with Globo during the world cup to serve Latin American countries with 8K HDTV covering.

But that is the satellite news.

The really big news is that England got through!  In a much more convincing performance, England won their quarter final match versus the Swedes 2-0. Mind you, while England’s captain Harry Kane did not score, he played well, as did the rest of the outfield players. Nevertheless, it was their goalie Jordan Pickford who was the star in saving three good Swedish attempts at goal. So it has to be said that England manager Gareth Southgate chose his goalie well. 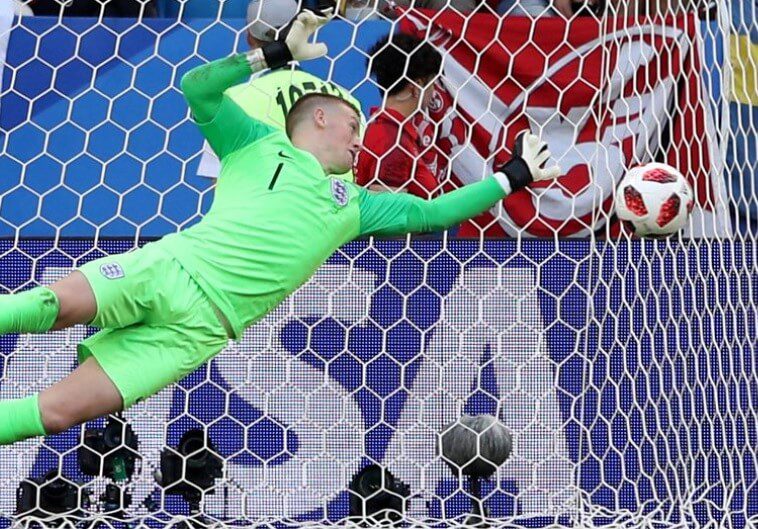 Sadly, the much improved FIFA World Cup hosts Russia were beaten by Croatia on penalties after a 2-2 draw after extra time.  So England meet Croatia in their semi-final on Wednesday 11 July, and thus won’t now need to be nobbled before the match as the Russians have now left the competition…Joke! 🙂 .

Now things start to get tricky for England as Croatia has one of the best midfielders in the world: Luca Modric. However, England can get past him and them – well – as long as England’s improving form continues, and especially if their luck holds and they don’t get dicky tummies (“Montezuma’s revenge” food poisoning infamously struck some of England’s players down in the World Cup in Mexico 1986). One thing though, while England have mastered scoring goals from set pieces, and have improved their passing, they will probably need a few more open play kicked goals as well to progress.

As it is, if Harry Kane does win the “golden boot” award as FIFA World Cup top goal scorer (he currently leads by two), it would be nice for him to have a few kicked open play ones in addition to his headers and penalties! But let us not get greedy. So long as England score more than the other team(s), that is what counts! Come on England!

Update on 11 July:  France have got past Belgium in their semi-final 1-0.  France look like a strong team with wonderkid Mbappe et al., as does the Luca Modric-captained Croatia who play England tonight in their semi-final.  At this point your correspondent would normally have had England trying to dig a tunnel out of the changing rooms in Escape to Victory (1978) movie-style to avoid defeat to Germany on penalties.  But Germany is long gone and Croatia is the opponent this time.  England has had the much easier draw so far (thanks to their cunning “B-team loss” in the group stage versus Belgium), but the diverse multi-faceted friendly England “A-team” are improving each game and look like they are enjoying it.  Let us hope that they reach the final and reach their peak performance there!  Come on England!

Further Update on 11 July: Poor old England lose to Croatia 2-1 after a goal in extra time.  Gallant lads they were and good at set pieces…but they needed a few outfield goals.  Better luck next time!  Still, Harry Kane is very likely to win the golden boot (one of your correspondent’s tips) – well – unless there are some hattricks or more by French players Griezmann or Mbappe in the final between France and Croatia.  So your tipster should make a bit of money…but not enough to cover recent losses on his African outsider tips and some other duff bets on World Cup matches and on some very slow horses at Ascot.

Final Update on 16 July 2018: It is congratulations to France as its football team won the FIFA World Cup final against Croatia 4-2 in Moscow, which included a goal from a new star on the world footballing stage, 19-year-old wonderkid Mbeppe, and a goal by striker Antroine Griezmann, and by midfielder Paul Pogba (the other goal was an own goal). England’s Harry Kane did indeed win the Golden Boot as top goal scorer of the championship. The three lions on his shirt will be proud.