After a record-breaking turnout and tense counts in swing states, Democrat challenger Joe Biden beat Republican incumbent President Donald Trump in the US Presidential election. Although more votes were cast for Trump than in 2016, he was beaten by Biden both in the popular vote and in the electoral college system. Trump later made unconvincing protests that there had been mass fraud in mail-in votes.

Opinion pollsters were mainly right in their predictions – albeit under-estimating how much support Trump and especially the Republican Party still had. Trump held onto the “big” states of Florida and Texas, preventing a Biden landslide. Analysts suggested that it was fear of left-wing politics in these states (for instance, among large Hispanic communities that are refugees from Communist Cuba) that led to him winning.  Although Afro-Caribbean communities traditionally vote Democrat, and even after his statements of support for white supremacist groups, Trump increased his support among black males who were apparently more concerned about the economy and job creation. Surprisingly, he also picked up votes among white females despite his reputation for misogyny.

The persistent Republican support was taken by analysts as a wake-up call for politicians in favour of somewhat intolerant, metropolitan left-of-centre “woke” and “cancel culture” attitudes, which are not always popular with other sections of the general public. Thus, while those on the left will push for high taxes on the rich and a big rise in minimum wage rates, a new Biden administration is expected to retain at least some of Trump’s tax cuts, which benefit middle and working class voters.

One left-of-centre policy that will be retained is “Obamacare”. This mass healthcare initiative was somewhat foolishly targeted by Trump, and is currently subject to a judicial review by the US Supreme Court.  The Covid-19 pandemic has concentrated the minds of many Americans on the inequitable state of its healthcare system. Biden could build on Obamacare by turning the Medicare system into a pan-USA, state-run health insurance system to the benefit of all citizens. Whether Biden can deliver this radical policy remains to be seen. Apart from opposition from the private health insurance lobby, he will need a majority in the Senate to get it though.

While there were some notable Democrat wins, including the former astronaut Mark Kelly in Arizona, the eventual result in the Senate awaits two races being re-run in Georgia in January, due to a requirement that winners gain 50 per cent of the vote. If these seats fall to Democrat candidates, there will be a 50:50 split in the Senate, giving effective control to the Democrat side via the casting vote of the new Vice President, Kamala Harris. However, if the Republican side can keep them, they will remain in control, making the passage of any controversial Biden-led legislation a much harder task.

So what will all this mean for Defence, Foreign and Space policies?

The Biden Administration will probably aim to get the Iranian nuclear deal back on track, but with respect to Russia, China, and North Korea, it is likely to be at least as hard line as Trump. His unpredictability was, in some ways, an asset when dealing with potential foes, making them think twice about what he might do.

Joe Biden is a noted expert on foreign policy and is expected to be more internationalist in his approach. Nevertheless, his past is not beyond criticism. He was Vice President in an Obama Administration that often seemed reluctant to act – whether over the Assad regime’s use of chemical weapons in Syria or the Islamic State’s involvement in the Middle East. Democrat inaction (and the inaction of the previous Republican President George W. Bush) arguably allowed a rogue state like North Korea to develop nuclear weapons. Whether Biden will remain as diffident on taking strong action remains to be seen.

While traditionally less keen to spend money on defence than other priorities, the increasingly apparent threats of Russia and China are likely to result in the Biden Administration keeping defence and military space spending up. As such, the US Space Force will probably survive, albeit with its remit closely defined.

Space did not really figure in either Biden’s or Trump’s campaigns. With respect to the US civil space programme, official announcements show the Democratic Party to be in favour of most of NASA’s Artemis plan for going back to the Moon and on to Mars. However, for cost reasons, depressingly, the Democrats seem intent on adding more delays to the timeline for a lunar return. This fuzziness on date-setting is a weakness in the Biden space policy and harks back to the delays and missteps of NASA’s past, including the cancelled Project Constellation. After dithering, the Obama Administration was later forced to build the SLS by the US Senate after entreaties from former Apollo astronauts. Costly as it is, at least NASA now has (or will imminently have) a large heavy-lift launch vehicle to pursue its exploration aims. In spite of its cost, SLS will happen even if only as an interim rocket – just the Block 1 version and no EUS (Exploration Upper Stage). However, that decision will wait until SpaceX successfully demonstrates Starship – a much cheaper to operate heavy-lift launch system (along with its super-booster reusable first stage) which will make SLS redundant. 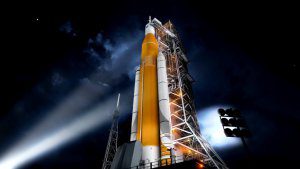 Biden can claim to be one of the architects of the commercial crew plan, which is just starting to bear fruit. This could be one of the reasons – in addition to its internationalism – why the Democratic Party wants to keep the ISS going. It gives commercial operators a place to go, even though this will bleed cash from the Project Artemis lunar programme.

A notable casualty will be the departure, on his own terms, of NASA’s popular Administrator Jim Bridenstine. Originally a Republican politician – and one suspects with further political ambitions – he has proved adept at running a large and complex organisation, while also diplomatically maintaining the line between NASA’s scientists and engineers and the White House.

Finally, after years of Republican global warming denial, the Democrats’ space programme will increase emphasis on studying the Earth, especially in respect to climate change. As such, one of Biden’s first acts will be to have the USA rejoin the Paris Agreement to tackle climate change.

Comment by David Todd: Joe Biden has in the past shown some dithering and weakness. And yet we can be hopeful. Biden is, by common consent, a good man. We hope – by God’s good grace (Biden is a Roman Catholic) – he is also a talented and lucky President.