With his wife Jill beside him, Joe Biden is sworn in as the 46th President of the United States of America. Courtesy: BBC

With the threat of being impeached President Trump very belatedly condemned the rioters. However, it was too little, too late and the House of Representatives voted to impeach him with 10 Republican representatives voting with the Democrats to do so. It is the first time that a US President has been subject to a second impeachment. If found guilty, Trump would be prevented from standing for President again.

The evidence against Donald Trump includes not only his alleged encouragement of sedition via Twitter, but also a taped telephone conversation in which he apparently tried to convince an election official to “find votes” to change the Presidential result in Georgia in his favour.

Nevertheless, It remains doubtful whether enough Senators will decide to “convict” Trump as a two-thirds majority is needed. Although his reputation is shot to pieces, he still retains a significant loyal following among Republicans, and some Senators may be unwilling to risk losing this.

So what will this mean for space?

Apart from having his election confirmed, the additional good news for Joe Biden was that the Democratic Party, which already had control of the House of Representatives, had also gained two more senators, Raphael Warnock and Jon Ossoff, via the run-off elections in Georgia. Not only did these wins put a stamp on Biden’s win, they gave the Democrats effective control of the US Senate via Vice President Kamala Harris’s casting vote. This will be important for getting legislation through.

The US nation remains resistant to left-wing policies involving significant redistribution of wealth, positive discrimination for minorities, unrestricted immigration, or the “woke/cancel” culture’s attacks on free speech and US history. These, and a disdain for the self-satisfied political establishment, were among the reasons why Trump’s support held up so well in the Presidential election, despite public displeasure at his handling of the Coronavirus pandemic.

Nevertheless, while this conservative sentiment is likely stop some of the more radical elements of any left-of-centre agenda, Biden’s strong political hand, along with the national weaknesses exposed by the pandemic, could allow him to improve citizens’ access to good quality US healthcare. Building on the “Obamacare” reforms, there may be an effort to introduce either a UK-style national health service or a state-run health insurance scheme.

One expected loser from the political change in the US government is NASA’s human lunar exploration project. While the Democrat side remains insistent that it still plans to reach the Moon, the “de-prioritisation” of the lunar landing date could mean that China’s “Taikonauts” beat US astronauts back to Moon.

Whatever its other faults, the Trump administration did give a renewed sense of direction to NASA’s human exploration programme, which was a relief after the vague predecessor that prevailed during the Obama Administration, in which Joe Biden served as Vice President. This sad state of affairs may yet return. As it happens, critics were already suggesting that NASA’s Artemis Programme would never be able to achieve the Trump Administration’s 2024 human landing target. This was mainly due to problems with the technology readiness of the high-energy cryogenic propellant storage and transfer systems needed for a lunar lander (required because of the lunar orbit performance limitations of the Orion service module), as well as resistance in Congress to fully fund such a lander. 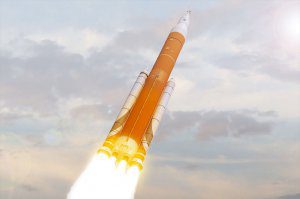 One Artemis-related programme that may suffer could be the planned Block 1B upgrade for the Space Launch System (SLS) heavy-lift launch vehicle. There is now an expectation that the planned Exploration Upper Stage (EUS) needed for this will be cancelled and that the future career of SLS may be a short one. The fact that new commercial heavy-lift launch vehicles, such as the SpaceX Starship/Superbooster combination, are likely soon to be in operation is one reason. Another is that Republican Senator Richard Shelby, a strong supporter of SLS given that much of the work is done in his Alabama constituency, will no longer be Chair of the Senate Appropriations Committee – the main decider of NASA’s budget, including for individual programmes.  Update: Senator Shelby has announced that he will not be standing for re-election to the US Senate in 2022.

Update on 26 January 2021: The SLS programme came under further pressure after its core stage engine firing was prematurely ended by a technical fault. The need to perform another test firing to provide enough engine test data is likely to delay the maiden launch of SLS into next year. Full story here

Some NASA programmes will benefit from a change in the political wind. Many of the Earth observation programmes aimed at detecting and studying climate change are to be revived after being cancelled by the Trump Administration. Biden was expected to re-sign the USA to the Paris Accords on limiting greenhouse gas emissions, reversing Trump’s decision to leave.

With respect to military space, Trump has the introduction of the US Space Force tied to his name, and this will remain. Likewise, his Administration’s decision to move space traffic management from the US military to the US Department of Commerce, rather than the FAA, is likely to remain in place, at least until it is shown to be failing. The same is also likely to be true of the National Space Council, which was set up by the Trump Administration to advise on US Space Policy.

Comment by David Todd: The Trump Presidency thus ends in disgrace. At the start of his Presidency we said Donald Trump deserved to be given a chance. He does not deserve another one. Perhaps the most serious charge against him is that, like some dictators past and present, he tried to destroy the very democracy that originally elected him to power. In this he deserves no sympathy.

While we continue to have concerns about whether dithering delays will return to US space policy, or even whether President Joe Biden is really interested in it, there are hopeful signs. President Biden specifically requested and was granted a loan of a piece of NASA moonrock (brought back by Apollo 17), which is now on display in the Oval Office at the White House.

Possibly Biden’s most urgent space problem will be what to do about replacing the International Space Station (ISS) which only has a few years left. Like the Artemis lunar lander, NASA’s plans for a part commercial ISS replacement remain very much underfunded.

Thus, we give our support to Joe Biden and Kamala Harris and wish them every success with their new Administration. They were, after all, democratically elected in a free and fair election, whatever the Donald Trump and his “big lie” might say.

Update on 15 February 2021: In the end Donald Trump “beat the wrap” in respect to the Impeachment charge that he had incited the riot. The result was 57 (including seven Republicans voting in favour of a guilty verdict with 43 (all Republicans) against.  However, despite this majority, this was less than the two thirds majority required for a conviction.  A combination of not enough evidence (Trump was careful in his use of language to his supporters), queries over whether a conviction was possible against a President no longer in office, and fears over the views of Trump’s Republican supporters, led Republican Senators to shy away from convicting Donald Trump even if many more are believed to have secretly wanted to convict him.  Nevertheless, the former President still faces a legal charge in Georgia that he attempted to subvert the democratic process by asking a state official in a telephone call to “find” votes for him.