This year’s very hot and sweltry Farnborough International Air Show (the move from October to July about ten years ago made the flying weather better –  but at the cost of comfort) had the most of the usual razzmatazz and big announcements.

Mind you, in this post-MeToo censorious and puritanical era, the glamorous pouting ladies on the exhibition stands were trying their best to look a bit more demure than usual. Meanwhile, as the armed police at the show tried to look like heroes, they knew really that they had been outdone in the “cool cat” stakes by various fighter pilots strutting around the show in their shades.

Somethings never change at Farnborough. It was business as usual for Boeing and Airbus who had their usual announcement war with hundreds of millions of dollars of commercial aircraft orders being made and shouted about – or at least news released. 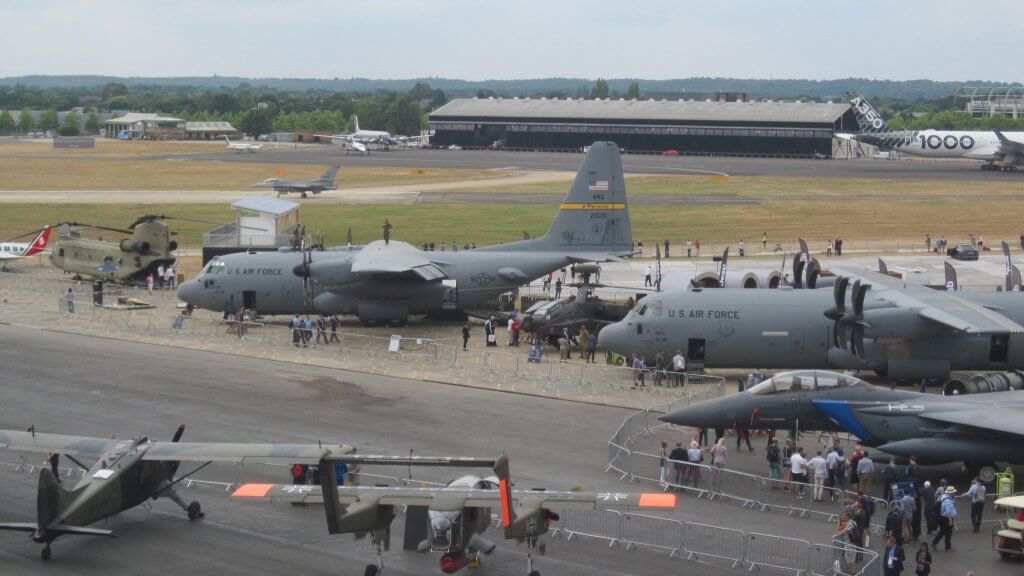 Fighters, military and civil transports (plus helicopters, drones and even flying cars) were all on display at Farnborough. Courtesy: Seradata/David Todd

Back on the ground, the centenary-celebrating RAF and BAe Systems announced a new aspirational one: the “Tempest” stealthy jet fighter. But while plastic composites are now integral to many civil and military jets, and despite its cockpit which you could sit in, the Tempest jet fighter on ground display was disappointingly actually just a full size plastic mock-up model. 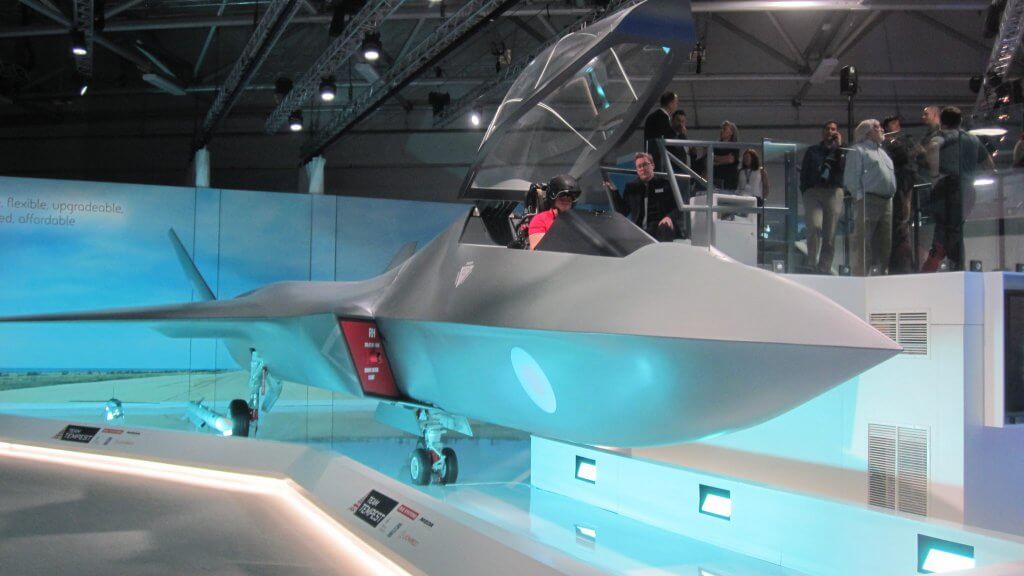 The Tempest jet fighter would be a world beater if it was not just a mock-up. Courtesy: Seredata/David Todd

And it will probably remain that way for decades to come as it will not fly until the 2030s – thus falling into the same trap that the Typhoon now finds itself in. For relatively new though the Typhoon fighter-bomber is, it took so long to arrive that it has become practically obsolete as the last of the previous non-stealthy fighter jet generation.

Still at least the new Tempest looks good. Its preliminary design has obviously been influenced by current stealthy jets (F-22, F-35 etc), past concept studies made by BAe Systems, and possibly by the fictional jet in Clint Eastwood’s Cold War movie thriller Firefox (1982).

While conventional aircraft were on display at Farnborough there were also flying cars being shown including once concept from Aston Martin in conjunction with their near neighbours Cranfield University.

Unmanned aerial vehicles (UAVs)/drones – and methods of how to shoot them down – were also exhibited. Looking like a twin-Lewis gun of days gone past, the SteelRock International outfit had designed a drone interruption gun called Nightfighter. With a range of 5.7 km it is a device for the jamming of electronic control signals or even to take over control of the drone itself. Essential kit for those that want to go nude sunbathing in privacy during this present UK heatwave. 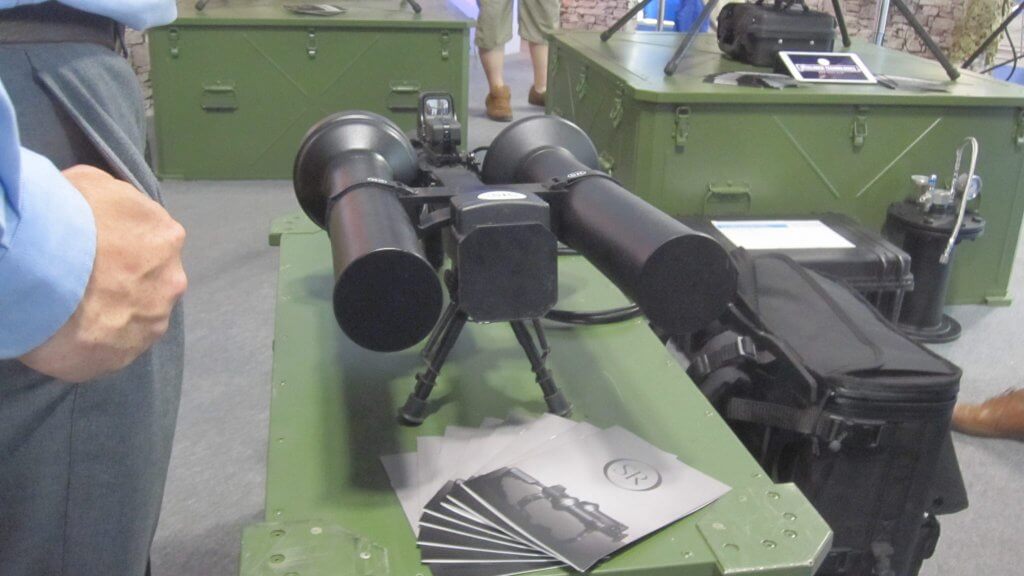 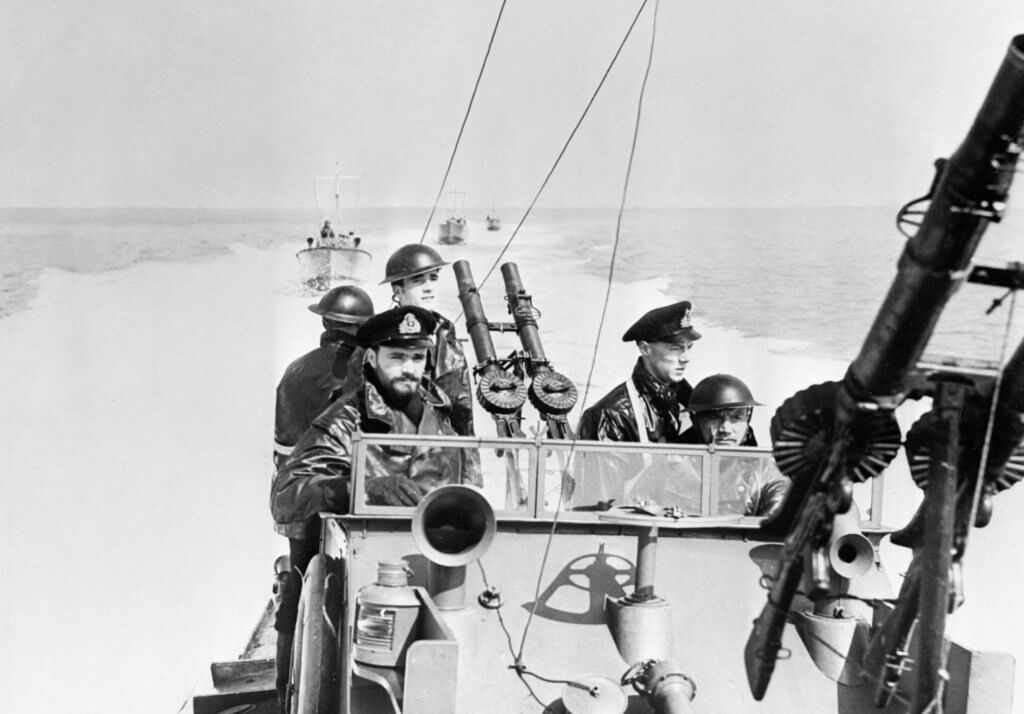 Some things have changed for the better at the show – but there were some schoolboy errors. The show’s security entry system was much quicker while the newly refurbished/redesigned main hall, Hall 1, is much better. There were also thankfully more toilet blocks in place around the four main exhibition halls, but wastefully most had far too many urinals for a hot July, but not enough sit-down cubicles to go around. This bit of “pony and trap” (cockney rhyming slang) planning resulted in queues in several of the toilet blocks, especially in those of Hall 1. Hall 1’s designers and architects had obviously forgotten that a lot of s**t goes down at the Farnborough International Air Show!  🙂

On a more polite note some just come to Farnborough to look at the flying rather than use the toilet. And there was quite a bit of that in the afternoon of each day.  While modern fighter and transport types were in the air, including an excellently flown Airbus A350-1000 airliner, surprisingly however there seemed to be a few more older types than usual. Even a Boeing 727 did a display. Of course, that late sixties/early seventies jet design famously became first ever supersonic airliner – ahead of Concorde – when one accidently broke the sound barrier during an emergency dive. 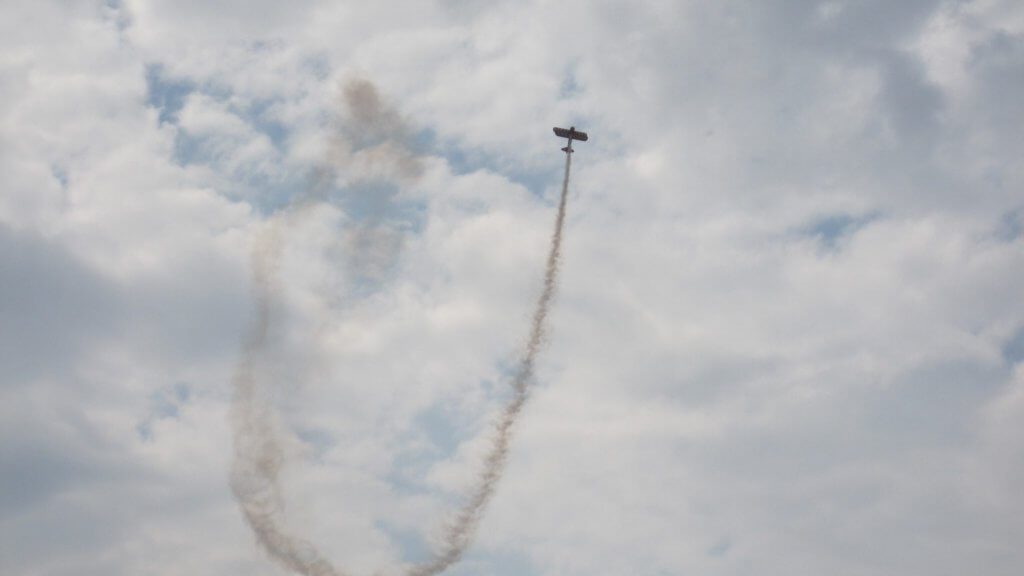 On the space front, the new NASA Administrator Jim Bridenstine (an ex-jet fighter jock himself) found himself similarly constrained to the Earth at Farnborough, even as he started talks with his ESA counterpart Jan Woerner about lunar space station and surface base plans.

With respect to Hall 1, Space had a surprisingly large presence. For while China’s and Russia’s space programme were pretty much absent (save for China’s CASIC with its KZ-1A and KZ-11 rocket offerings along with those from OneSpace), there was very large space area set aside in the hall for the UK’s and other international space outfits.

Meanwhile, the splash headline of the week was UK government’s formal announcement that its first “vertical” spaceport would be Sutherland, Scotland – plus some commercial rockets supplied by Lockheed Martin, Orbex et al to launch from there.

Although some wondered about the risk to oil rigs on the flightpath, at least the UK Space Agency had shown itself cunning enough to get the UK back into the space launch business for such a small outlay – just a few tens of millions of pounds. Hurrah probably thought the UK Treasury as it admired this coup before then wincing over the hugely costly hundred million-pound-per-copy price of the latest F-35 fighter jets needed by the RAF! 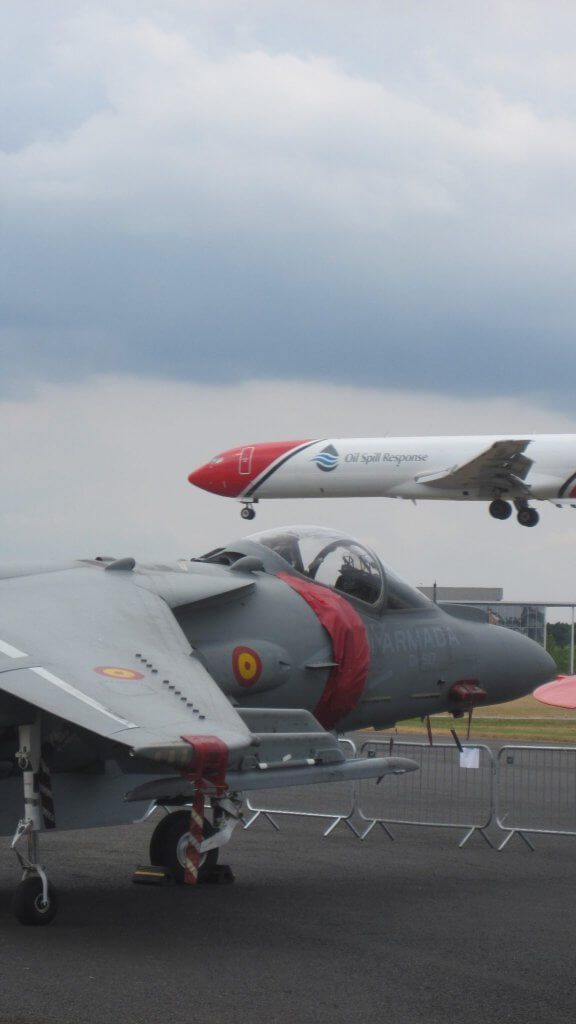 And while Newquay has yet to be formalised as the first “horizontal” space port, it could at least note that others were picking it as their first choice including Virgin Galactic and Virgin Orbit. Cornwall – including Newquay’s airport/spaceport –  even had its own stand including one section covering the famous Goonhilly satellite receiving station which has not only survived a near closure, but is now prospering very nicely thank you very much, and even has “deep space” communications network. 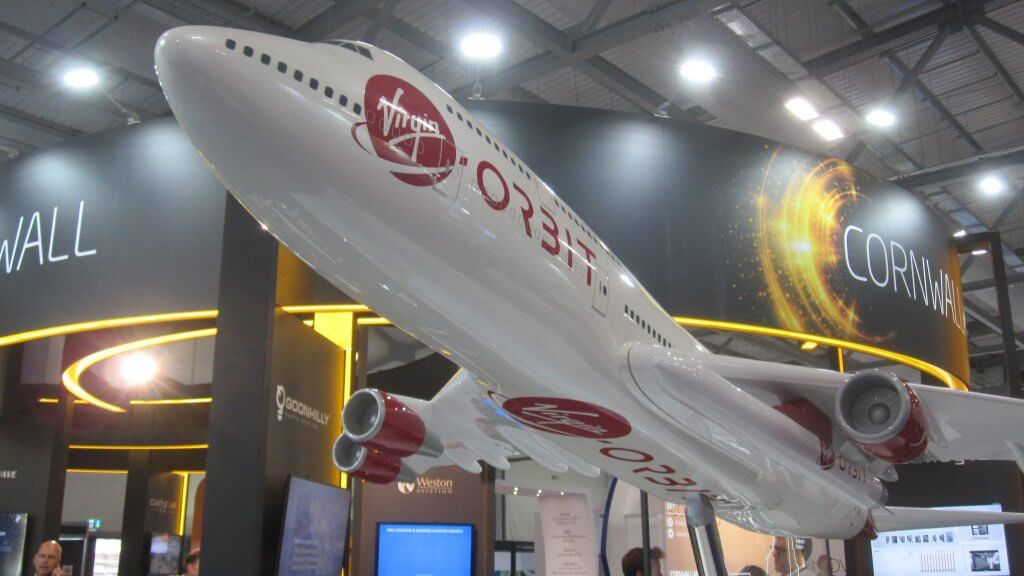 The Cornwall stand had the Virgin Orbit Boeing 747-400/LauncherOne combination on display as a model. Courtesy: Seradata/David Todd

Not on the Cornwall stand, though it should have been, was an outfit in Hall 1 selling Cornwall-grown Tregothnan tea. So what it its relationship to the air show? Well – apart from being an official supplier, one of its brands is Spitfire tea (a blend of Tregothnan’s own leaves with stronger Indian Assam tea).

While things for the UK space industry are looking good, there is one cloud on the horizon: Brexit. For while a fretful-looking (mind you she always looks that way) Prime Minster Theresa May obviously had Brexit and its related close parliamentary votes on her mind as she visited the air show at the start of the week (possibly realising that her Prime Ministerial predecessor David Cameron’s last official visit was to Farnborough before his resignation), the space fraternity continues to worry about what Brexit would mean for themselves. They are especially concerned over the future or otherwise of British involvement in the Galileo satellite navigation constellation project.

The AA traffic directing sign at the end of the car park’s exit road was ominous: “Switch your sat-nav off and follow the signs,” it said. As we might all surely soon have to.