“Patriotism is the last refuge of a scoundrel”, or so said Samuel Johnson in 1775.  These words still have resonance, even in the modern era, when economic hardship and unpopularity can often be the spur governments into making distracting “patriotic” military incursions and even war.  For example, it was economic hardship and government unpopularity which was the trigger for Argentina’s patriotic (subsequently repulsed) invasion attempt on the British-held Falkland Islands (Malvinas) in 1982, a territory it has long claimed as its own.

As such, as China’s economy slows and its stock market goes into a tail spin, the West has become especially fearful that, should things get worse, China may attempt to enforce its claims over various island groups in the South China Sea, or even try to wrench back the “renegade island” of Taiwan.  The People’s Republic of China actually does have past form in mounting full blown invasions, albeit a relatively long time ago when it invaded and annexed the nation of Tibet in 1949.  Since then it has mounted more minor incursions into neighbouring states and has claimed sovereignty over the entire South China Sea where it has recently controversially started to build artificial “military” islands on sandbars there.

Of course, to attempt further annexations in the Far East, China would have to defeat the US Navy, the de facto enforcer of peace in the Pacific Ocean region with its multi-aircraft carrier fleet acting as its “big stick” strike force. However, the armed forces of China may have now found a way of holding off the US Navy super-carriers from intervening: the development of an Anti-Ship Ballistic Missile (ASBM).  Based on the DF-21 two-stage solid propellant ballistic missile, the  DF-21D missile has a guidance system and warhead specifically designed to strike carrier sized targets in a “rods from the gods” near vertical attack.   The missile, which is described as a “carrier killer” by Chinese news media, is initially targeted using Yaogan series of optical and Synthetic Aperture Radar (SAR) detection satellites along with aircraft/drone carried detection systems.  The DF-21D, which has an estimated range of up to 2,800km, is then thought to use its own radar or infrared  or passive electronic detection system for terminal guidance.  It is  thought that a version of the missile may also have also been used in anti-satellite tests.

In other tests, the DF-21D missiles have already allegedly been used to sink ships mimicking the radar cross section of an aircraft carrier.  While US Navy Aegis radar defence system-equipped cruisers and destroyers can defend themselves and an aircraft carrier against a limited DF-21D attacks using Standard SM-3 interceptor missiles, they, along with electronic warfare methods, would probably not be able to stop a massed missile attack from striking a carrier.

As such, it was taken as a show of its military power that China displayed these DF-21D missiles along with the rest of China’s most modern military hardware during the August Victory Day military parade in Tiananmen Square in Beijing. This parade, which including massed ranks of soldiers with columns of tanks, missiles, artillery passing through the square as well as helicopters and jet fighters making flybys, marked the 70th anniversary of the military victory over Japan (VJ Day) at the end of World War II. China, in its pre-communist days, was the allied nation which suffered the longest in this conflict after Japan’s original invasion of Manchuria in 1931 and subsequent all out war with China in 1937.

Amusingly, and no doubt to help Western intelligence analysts with their identification, the missiles’ launching vehicles had the DF-21D insignia clearly painted in white onto on their camouflaged sides.  This intentionally easy-to-identify missile “show of strength” was a signal that China not only has its very large Peoples Liberation Army of soldiers at its disposal, it also has sophisticated weaponry within its army, navy and air force.  This was a message that was not lost on military and diplomatic analysts in the West. 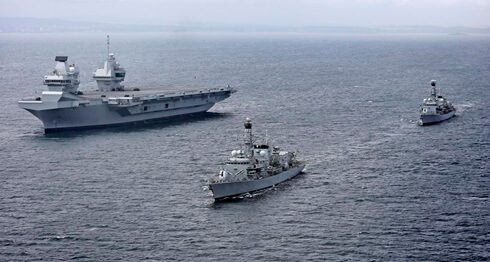 Analysis: Russian and UK defence ministries insult each other’s aircraft carriers but in truth both are vulnerable

Like schoolboys in a school yard boasting about their respective prowess or possessions, a war of words has broken out Read more

UK Strategic Defence Review has good news for the RAF and British Army, mixed news for Royal Navy, and no news for Space