Spacewalk disconnects cables on mating adaptor ready for its move 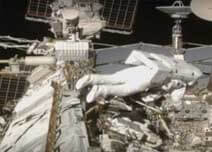 Expedition 50 Commander Shane Kimbrough of NASA and Flight Engineer Thomas Pesquet of the European Space Agency (ESA) conducted a spacewalk outside the International Space Station on March 24. The main job was to disconnect cables and electrical connections on Pressurized Mating Adapter-3 (PMA-3). In addition the two astronauts lubricated the latching end effector on the Canadarm2 robotic arm and replaced a computer relay box (EXT-2 MDM) on the station’s truss. The airlock was depressurized at 1116 GMT and repressurized at 1758 GMT (all times from NASA via Jonathan McDowell).

The PMA-3 system will be robotically relocated on 30 March by ground controllers from the port side of the Tranquility module to the space-facing side of the Harmony module for the future installation of a second International Docking Adapter that will accommodate the arrivals of commercial crew vehicles.

The spacewalk is the first of three planned in a two-week period for station crew members that will see PMA-3 reconnected to its new location on Harmony and an avionics box replaced that routes electricity and data to station experiments.